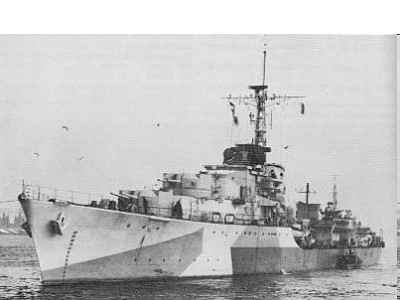 AVAILABLE FOR PRE-ORDER.  A PROFORMA AT THE CORRECT PRICE WILL THEN BE E-MAILED WHEN THE ITEM IS RELEASED.  THERE IS NO COMPULSION TO ACCEPT THE PROFORMA.

HMS Barfleur (R80) was a Battle-class destroyer named after the Battle of Barfleur, which involved an Anglo-Dutch Fleet against the French in 1692.

Barfleur was built by Swan Hunter & Wigham Richardson Limited on the Tyne, who launched her on 1 November 1943; she commissioned on 14 September 1944.
Barfleur was the only ship of the class to see action during WW2. She joined the British Pacific Fleet upon commission, seeing action during the campaign against Japan. She was present in Tokyo Bay when the Japanese signed the official surrender on USS Missouri on 2 September 1945.

In 1946, Barfleur deployed to the Far East along with the rest of the 19th Destroyer Flotilla, performing a variety of duties, including visiting many ports on 'fly-the-flag' visits. Barfleur returned to the UK with the rest of her flotilla in 1947, and was subsequently placed in Reserve.

In 1953, Barfleur took part in the Fleet Review at Spithead in celebration of the Coronation of Queen Elizabeth II, being positioned in the middle of HMS St. Kitts and HMS Crossbow. Barfleur also became Captain (D) of the 3rd Destroyer Flotilla, which served in the Mediterranean. While there, Barfleur picked-up survivors from a Handley-Page Hastings that had crashed in the region. Upon the completion of her task, she returned the plane's crew to Malta. In 1954, Barfleur moved back home but returned to the Mediterranean the following year. The destroyer was involved in the Suez War in 1956, taking part in the Allied landings in early November. Barfleur returned home later in the year for the last time to join the Home Fleet.

In 1958, Barfleur was put in Reserve before being placed on the disposal list and broken up at Dalmuir in 1966.