"This is a kit bash using parts of the Airfix HMS Hotspur. The first part of scratch building came when detailing the deck. The moulded on anchor cables and capstans were cut off, the quarterdeck and fo’c’stle had the anti-skid pattern engraved with a knife and then the details were added. The capstans were made out of stretched sprue. The reinforcements under the cables and the breakwater were made out paper. Once this basic detail had been added I decided to begin the task of building the sea base.

I had been wanting to make a rough sea, but couldn’t find the model to suit it; enter a small, easily built destroyer who would be right at home in a gale. The large waves were made out of layers of card with a recess cut in the middle for the ship. These blocks were then covered in papier maché and painted. The painted hull, minus boot topping, was glued in place. Around five layers of acrylic gel were used to shape these large waves and make smaller ones. The advantage of using many layers was a translucent effect, generated by 5mm of clear gel over a painted base, was obtained.

Now that the base was nearly finished I could build the more delicate parts of the ship. The anchors, from the 1/720 Italeri HMS Hood, were added and White Ensign Models (WEM) photo etch (PE) cables put in place. The bollards were removed from the Airfix HMS Belfast and the fairleads were from WEM. The next project was the forward and aft superstructures. The aft one just had the cumbersome and inaccurate spray shield replaced with paper. This was done to the forward one as well, but not before a 1.5mm layer of plasticard was added to increase the height of the superstructure. The bridge and its components were taken from Hotspur but with substantial improvements. The flagdeck was replaced with plasticard and a CA soaked paper screen. The screens on the bridge were made out of paper, as were the doors on the director. The protrusions on the rear of the bridge were built using paper and white glue was used to make the bases. The supports above the bridge were stretched sprue.  The forward and aft superstructures were then glue onto the painted deck.

The next job was the 4.7inch mountings. The kit shields were solid plastic, so were replaced with paper ones. The barrels, breeches and bases were taken from the Italeri Hood. The collection trays and counter balances at the rear of the mountings were also constructed from paper.  The Airfix torpedo tubes were basic but useable. To improve them I added compressed gas bottles(made from WEM pompom magazines) and screens made from  paper. The other weapons, the Vickers mounted amidships, were built from the WEM PE set. Their platform was from the Hotspur kit, but had the screens replaced with… trusty paper! The search light platform was also made using this versatile material; the lights were from the Hood kit. The Carley floats are taken from the Airfix Belfast.  The funnels were taken from the Hotspur kit, given a clean up and detailed. The steam pipes are wire, the sirens on the after funnel are the magazines from a spare PE Vickers. The platform was from the WEM 1/700 Tribal PE set. The cages were constructed using a basic ‘X’ shape made by part of the radar off a Type 42. The other four spars were stretched sprue.

WEM PE doors and ladders were added and the scuttles drawn on with pencil. The life rings were painted on and plasticard lockers added into various places. Before the boats could be added the anti-skid strips and boot- topping were applied. This was done by painting masking tape brown and dark grey respectively and then cutting it into strips and sticking it on. This technique was also used to make the funnel band.  The boats were from a box of spares; the davits were from the WEM 1/700 Tribal PE set, as was one of the torpedo davits (the other is paper), bullring on the prow and depth charge rack; the depth charges and davits on the stern were taken from the Hotspur kit. The masts were built last, so as to prevent them being knocked about during the rest of the build. They were built out of wire of various thicknesses. The crow’s nest is sprue. WEM PE railings and GMM figures were the put in place, a PC printed pennant number added, and then the weathering process began.

A black/brown watercolour wash was used to bring out different areas of the ship, such as the torpedoes, and to look like dirt and grime. A red/brown ash was used to paint on rust. Graphite was used on various parts to visually break them up, e.g. the 4.7inch mountings. White paint was used to highlight the waves and the streaks of water running off the hull. Cotton wool was used to simulate water gushing out of the hawse pipes and to simulate the water being forced out as the ship ploughed through the water. It was also used to give the effect of the sea being whipped into a spray by the wind. The ship was then sprayed with a satin varnish so as to appear ‘wet’ in 1/600 scale. The fo’c’stle, iron deck, hull and sea were sprayed with a gloss varnish.

The final task was to add the rigging, made from stretched sprue, and a White Ensign, made from a design printed from my pc onto decal paper." 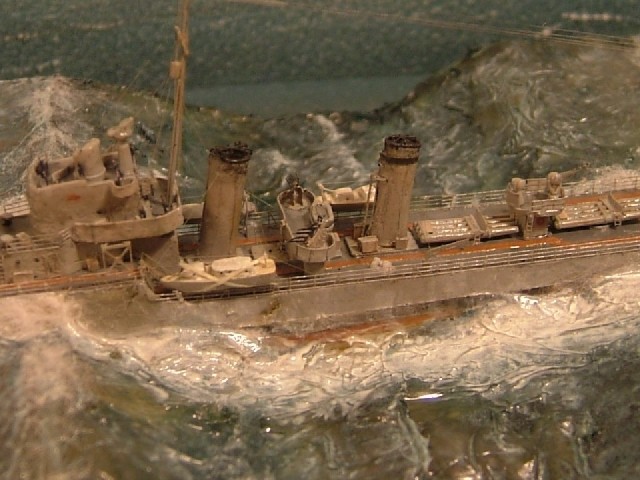 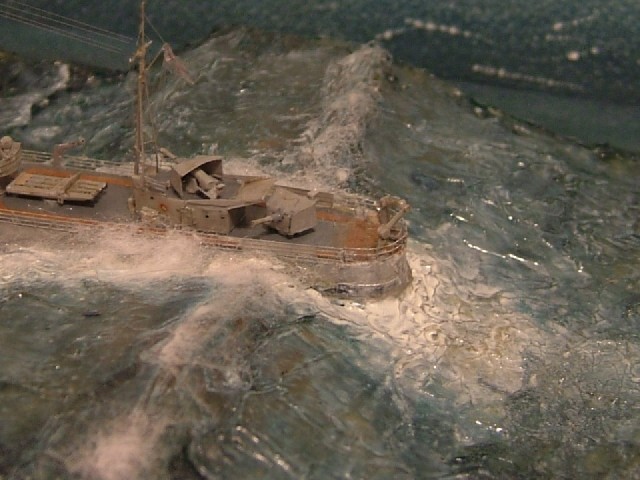 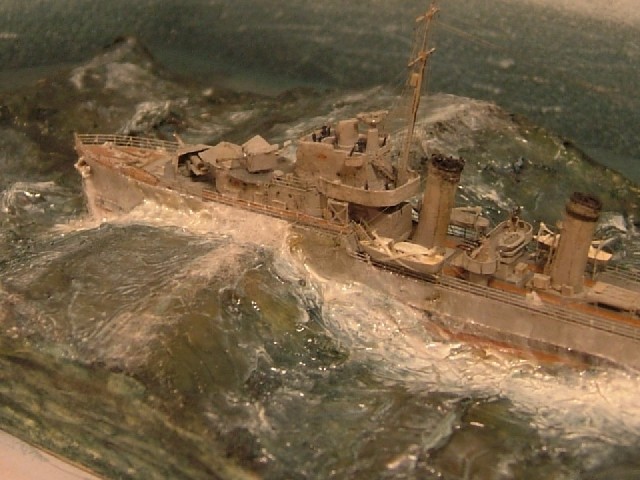 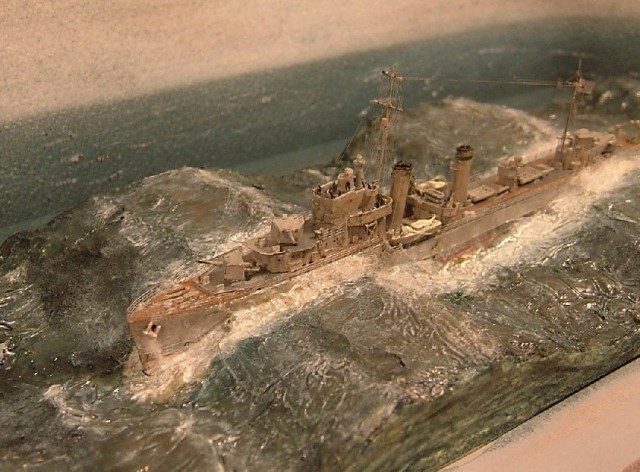 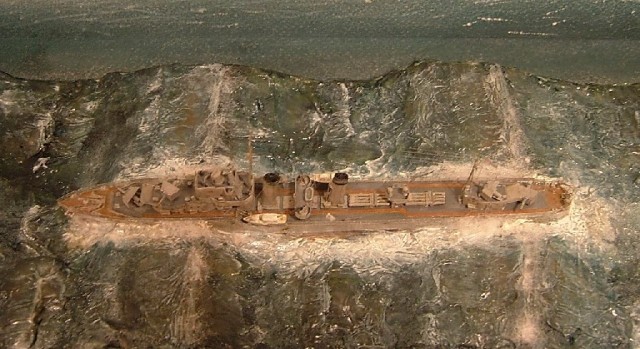 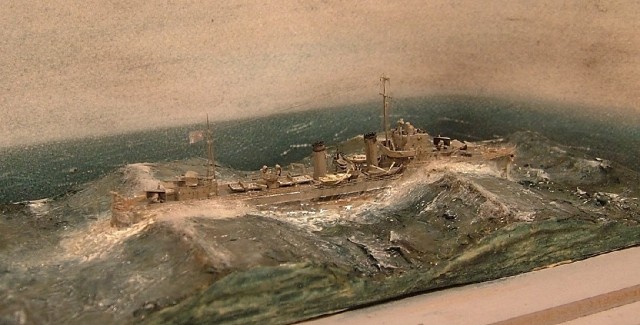 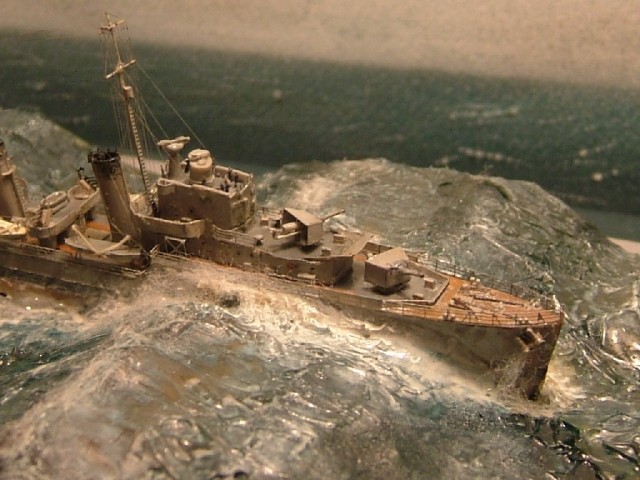