Chris tells the story in his own words:

This model represents HMCS SIOUX - a Second World War destroyer of the Royal Canadian Navy.  She was laid down for the Royal Navy as HMS VIXEN as one of the "War Emergency Programme Fleet Destroyers", and commissioned into the RCN as HMCS SIOUX in February, 1944. This model portrays the SIOUX a she appeared during the Normandy Invasion in June, 1944. The model was built for a co-worker, who's father served onboard SIOUX during the Normandy Invasion as one of her Chief Gunners, and was presented to this gentleman yesterday, 28 Sept. 2004.

The model is a conversion of the excellent White Ensign Models kit of HMS JANUS, Kit No. WEM K 3556, with custom photo-etched parts (the Lattice Main Mast; Gun-shields for the 4.7" Guns; the HF/DF Aerial; the small grill platform around the rear of the Funnel) by Tom's Modelworks, and paints from WEM's excellent line of naval colours, and Humbrol paints.

Work began with comparing the hull and various kit parts to a 1/350th scale drawing of HMCS SIOUX, to determine what surgery would be required, and what kit parts could be used. To start with, the hull had to be lengthened by approximately 3mm at either end to bring the hull to a correct, scale LOA of 362' 9", and the stern altered from a rounded transom shape to a squared-off shape. This was done by gluing plastic strips to the deck-edge and at the waterline of the bow and stern, shaping these additions to the correct overhead view of the hull profile, and then filling in the space in between with a marine-grade 2-part epoxy putty, and sanding to shape. Also, the positions of the scuttles (port-holes) on the hull and superstructure had to be altered to a wartime fit.  All the moulded-on deckhouses (the smaller structures, amidships) with the exception of the main (forward) superstructure, were removed, as they were of a different shape than those on the later "V" class destroyers, and had to be replaced with scratch-built structures. Also, the aftermost deckhouse had to be moved forward approximately 4mm, to match the drawings and allow for a forth 4.7" gun mount in "Y" position. Both this remaining deckhouse, and portions of the forward superstructure had to be altered in the shape of their extremities, from those for the prewar "J" class, to that for a wartime "V" class destroyer (and I still didn't get all the differences between the two classes covered).

Once the basic structural differences to the hull and superstructure had been done, it was time to tackle the armament, mast and radar fit. This is where Tom Harrison came to the rescue, and did a custom P-E set of gun-shields, lattice mast, HF/DF antenna, and other details for me - thanks Tom! The armament for this class of destroyer was different from that provided for JANUS. Rather than six 4.7" QF Mk XII guns in three twin CPXIX Mountings, SIOUX mounted four 4.7" QF Mk IX guns in four single CP XXII mountings - which meant different gun-shields, and four scratchbuilt guns and mountings. Also, instead of a single 2pdr pom-pom quadruple Mk VII mounting, SIOUX was equipped with a twin 40mm Bofors "Hazemeyer" Mk IV mounting, between the torpedo tubes. This mounting had to be scratch-built, but was based on a spare twin 40mm mount from the Tamiya 1/350th USS FLETCHER. The close range armament of four twin power operated 20mm Oerlikons on Mk V mountings, were made from parts robbed from Tamiya's HMS KING GEORGE V, and fitted with P-E guns from the JANUS kit. The torpedo tubes were altered from the "J" class's five-tube mounts to the four-tube 21in Mk VIII quadruple TT mountings, as mounted on SIOUX.  The armament was rounded off with two depth charge racks on the stern, and four depth charge throwers, positioned two on either side of the after deck-house (and yes, I realize that there should be depth charge racks with reloads by the throwers, and depth charges in the racks on the stern).

Painting was done with WEM and Humbrol paints, and both went on without any trouble. I've used Humbrol paints for years, but this was my first time using WEM paints, and they are very good. I used VOL. Three of Alan Raven's "Warship Perspective - Royal Navy 1943-1944", and much assistance from John Snyder, to confirm the colour scheme worn by SIOUX in 1944 - thank you John, for your patience, but I must apologise - I deviated slightly in the colour for G45, and think that I ended up with a shade that's too dark. (next time, I'll listen!) The model was masked and painted after all the P-E railings had been installed. Masking was done using Tamiya masking tape, and I had no problems with paint creeping under the tape, or the tape lifting paint off, during it's removal. The model was painted separately from it's sea base, and then installed. The sea base is made from two thicknesses of oak, with the top thickness covered with Milliput - my first time using this product, which in turn, was covered with artist's acrylic gel, and then painted using whatever looked right, using Tamiya and Humbrol paints. Rigging was done using stretched sprue - several times, as I kept breaking it as I "tensioned" each length (using a fine tip, gas-powered, soldering iron - eventually I succeeded !!).

Final weathering consisted of applying rust to the stem, anchors, anchor cables, etc, and to hide some hull blemishes that I didn't spot until after the final colour coats were done. Next time, I'll prime first, then paint. Once other details were highlighted with some dry-brushing, and the White Ensign was "bent on and hoisted", everything was given a final matt finish using Humbrol's Matt varnish.

This project took six months to complete, and has got me thinking about doing one for me, also based on WEM's kit of HMS JANUS. 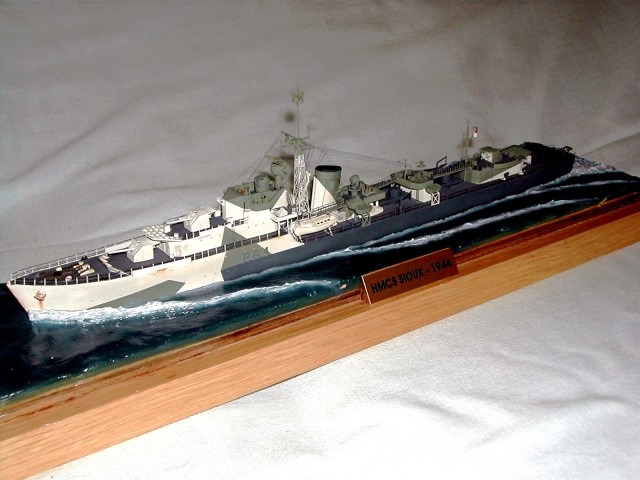 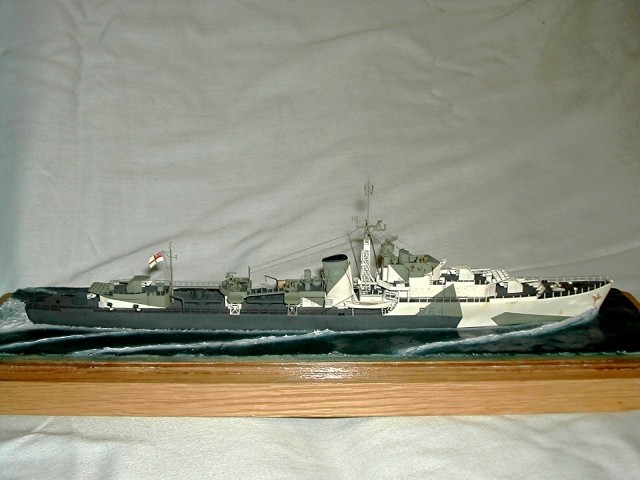 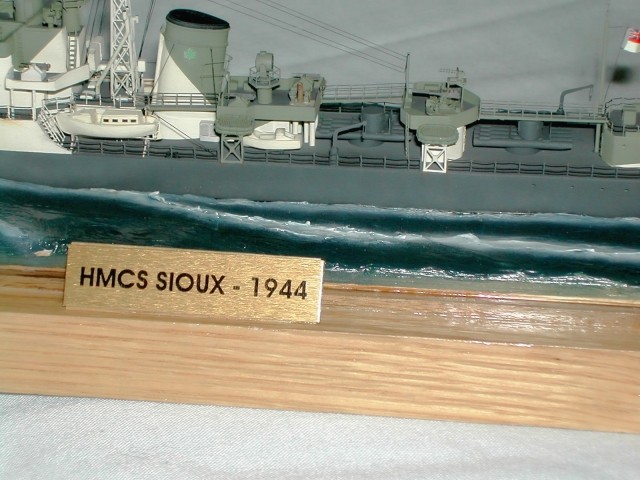 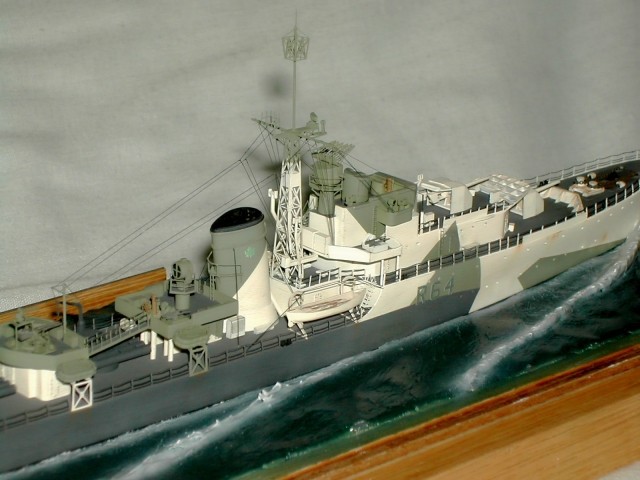 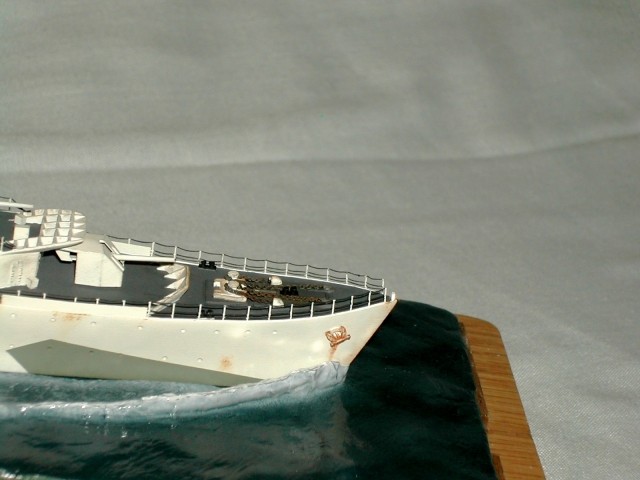 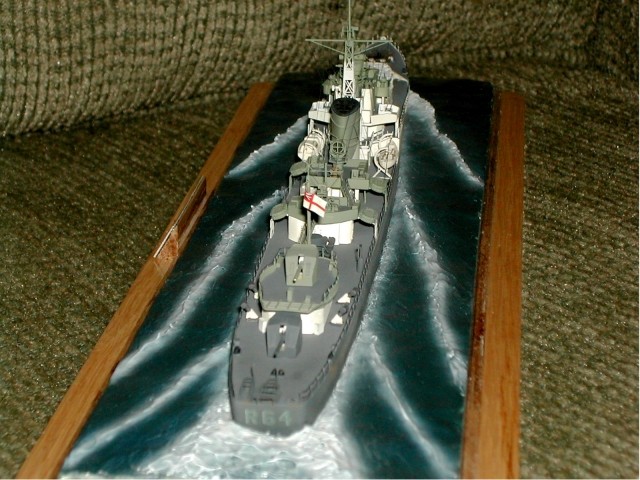