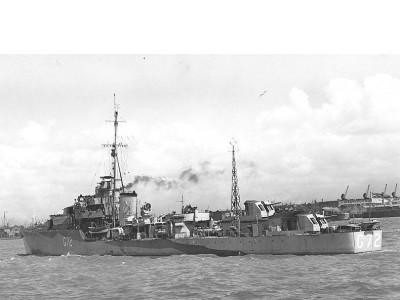 HMS Scorpion (G72) was ordered from Cammell Laird, Birkenhead with 5th Emergency Flotilla on 9 January 1941. She was laid down on 19 June 1941 as Yard No 1094, and was intended to be named Sentinel. However this was changed after the loss of HM River Gunboat Scorpion in an action with Japanese destroyers off Sumatra on 13 February 1942. Launch was delayed until 26 August 1942 due to serious design problems & the late delivery of armament &  fire-control equipment. She was the 11th RN ship to carry this name, introduced in 1746. Build was completed on 11th May 1943.

Scorpion served on the Russian Convoys, and participated in the Battle of North Cape where she obtained one torpedo hit on Scharnhorst. These duties were interrupted only for service in Operation Neptune, the invasion of France, from July to August 1944 to provide defense against S-boat attacks on invasion shipping.

HMS Scorpion was reduced to Reserve after VJ Day, & sold to the Netherlands on 1 October 1945.She was renamed Kortenaer in commemoration of a destroyer lost in action with Japanese warships in the Dutch East Indies on 28 February 1942. The ship served as a destroyer until 1957 when converted for use as a Fast Frigate, & remained in commission until 1962 when she was broken up in Holland.