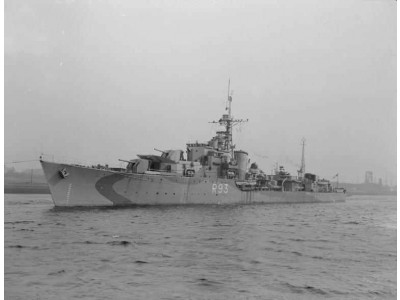 HMS Vigilant was ordered from Swan Hunter at Wallsend with the 8th Emergency Flotilla on 1 September 1941. She was laid down on 31 January 1942 & launched on 22 December 1942 as the 19th RN warship to carry this name, introduced for a Prize taken in 1743 and previously used for a WW2 hired trawler until 1943. She had been adopted by the civil community of Launceston in Cornwall after a successful Warship Week National Savings campaign in March 1942. The build was completed on 10 September 1943 & included protection for Arctic service.

On 15 January 1945 she deployed for Trincomalee, escorting carrier HMS Formidable. In February Vigilant was part of the screen for Operation Stacey, air attacks on shipping in the Andaman Sea & photo-reconnaissance of the Kra Peninsula & the Malayan coast before returning to Trincomalee with defects. In March 1945 she was part of an anti-shipping strike into the Andaman Sea (Operation Onboard) which resulted in the sinking of 4 Japanese merchant ships & their 2 escorts. In April & May she continued her screening duties for battleships & carriers in Operations Sunfish, Dracula, & Bishop, joining HMS Saumarez & HMS Verulam to bombard Oleelhoe during operation Sunfish.

In May 1945, during Operation Bishop, Vigilant deployed to intercept Japanese ships sighted in the entrance to Malacca Straits (Operation Dukedom), and was
detached with destroyers HMS Saumarez, Verulam, Venus & Virago to search for enemy ships north of Sumatra (Operation Mitre). On 15 May the destroyers
engaged the Japanese cruiser Haguro & destroyer Kamikaze, sinking the former in a brilliant night torpedo attack in the Malacca Straits southwest of Penang.

From June through August 1945 she continued her escort duties in various operations with the Eastern Fleet.

HMS Vigilant returned to the UK after the surrender at Singapore & was retained in service. She returned to Harwich in January 1946 prior to being  deployed in the Londonderry Flotilla for ASW training. During September 1946 she was transferred to the Mediterranean Fleet in Malta. On return to UK in 1947 the ship was paid-off and reduced to reserve status at Portsmouth. She was converted into a Type 15 Frigate by J Thornycroft at Woolston between 1951 & 1952. On completion in September 1953 she joined the 6th Frigate Squadron Home Fleet. She collided with the frigate HMS Relentless in the Clyde area on 27 October 1954 & was seriously damaged. HMS Vigilant was selected for use as a cadet training ship in the Dartmouth Training Squadron after repair, & was refitted for this duty. The alterations included an enclosed bridge & a deckhouse for classroom use. She deployed with this Squadron until 1963, when she was reduced to reserve at Devonport. Placed on the Disposal List in 1965, Vigilant was sold to BISCO for breaking-up at Faslane by Shipbreaking Industries. The ship arrived at the breakers yard in tow on 6 June 1965.

More details courtesy our good friend John Murray, who served in Vigilant: "She underwent another refit in the early 1950s when she had her multiple forwrd Bofors removed & had additions to her superstructure This included a flying bridge & a large chart room which doubled as a lecture studio. I joined her in 1955 when she recommisioned as Captain “D” of the Dartmouth training Squadron along with her sister ship Venus. This was on the 8th November 1955, under the command of Captain John Earl Scotland & she became my home for the next 2 years where I became Chief Quartermaster. She was a very happy ship & carried an extra large compliment of officers, to cape as instructors for the Cadets & Midshipmen whom we took to sea & taught them all how to be seasick. During this time we visited almost every port in Europe, & also Gibraltar with a summer cruise in the Med."