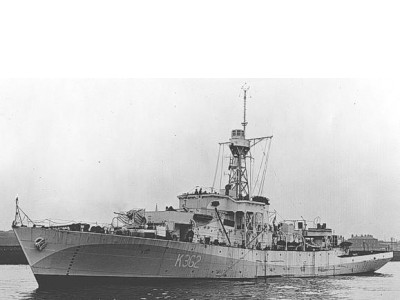 On 9 September 1944 Portchester Castle & Helmsdale sank U-484 in the North Atlantic northwest of Ireland. Later, as one of 4 ships in 30th Escort Group under the command of Denys Rayner, Portchester Castle shared in the sinking of U-1200 south of Ireland on 11 November 1944, along with her sister ships Launceston Castle, Pevensey Castle & Kenilworth Castle. She was paid off in 1947.

In 1951 Portchester Castle was employed to represent the fictitious HMS Saltash Castle in the film The Cruel Sea, in which she is shown wearing the pennant number F362, rather than her own K362. In 1955 the ship was also seen in the film The Man Who Never Was.